2023-01-26 10:24:45 | Warning: count(): Parameter must be an array or an object that implements Countable in /home/w17721/public_html/page/classes/controller/index.php on line 359 How Solar Energy Could Reduce Vehicle Idling 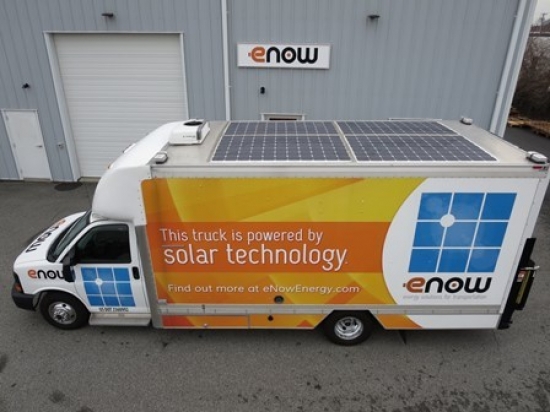 Vehicle idling is often in the news in Louisville. During the summer, ozone alerts warn residents that the air is unhealthy and will be made worse by vehicle exhaust. And residents living near industrial sites — like the JBS Swift plant in Butchertown — have complained about the exhaust from refrigerated trucks burning diesel constantly.

Well, a company that sells solar energy systems for vehicles says that doesn’t have to be the case.

eNow — a Rhode Island-based energy company — was at the Mid-America Trucking Show in Louisville last week. eNow makes solar panel auxiliary systems for the transportation industry. They look sort of like rooftop solar panels, but they’re much thinner — only 1/8 of an inch thick, and encapsulated in Teflon. When they’re mounted to the top of a truck, they use solar energy to charge a battery that can run the truck’s mechanical systems.

eNow CEO Jeff Flath pointed to a demonstration screen mounted inside the truck. It tracks how much energy is coming into the system, and how much is going out.

“So if you look up here at the screen, live here in this truck, we’re producing almost 60 amps worth of energy from the solar panels we have up on the roof,” he said.

Turning on the microwave or air conditioning starts depleting some of the stored energy. But turning on the truck’s engine supplements it. Flath clicks a button and the truck starts.

“So right now, we’re generating energy from solar,” he said. “We just went under a cloud, so you can see that the solar dropped to 16 amps, but now we’re supplementing that with the alternator.”

Using solar energy instead of gas or diesel engines reduces the amount of greenhouse gas vehicles emit, as well as reducing air pollution.

This is useful on several levels. For small-scale utility trucks, a solar panel on the roof would allow workers to charge their electronics and tools without running their engines all day. For long-haul truckers, solar panels would let them run the air conditioning in their sleeping compartments without idling the truck all night.

And solar panels could even work — to an extent — for refrigerated trucks.

Earlier this year, Louisville Board of Zoning Adjustment weighed in on trucks idling in JBS Swift’s Cabel Street lot in Butchertown. Neighbors complained about the diesel engines running 24/7 to keep the pork products chilled, and BOZA ultimately placed some restrictions on the lot.

Flath said he’s working on a system for refrigerated trucks that would be sufficient to provide about 40 percent of the energy they need from solar.

Flath estimates that a truck driver just using the solar power for heating and air conditioning 10 hours a day, 300 days a year, will recoup his investment in 9-12 months. The company has partnered with Louisville-based Dometic, which makes comfort products for trucks and other vehicles, to streamline the technology and make it more widely available.