2023-01-26 11:15:36 | Warning: count(): Parameter must be an array or an object that implements Countable in /home/w17721/public_html/page/classes/controller/index.php on line 359 Photovoltaic Systems Installed Price Reductions Have Been Driven Primarily by Declines in Soft Costs. 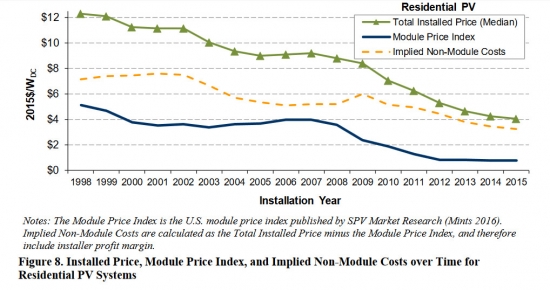 Recent Installed Price Reductions Have Been Driven Primarily by Declines in Soft Costs.

A period of rapidly falling installed prices began in 2009, prompted by a steep drop in global prices for PV modules. Since 2012, however, module prices have remained relatively flat, while installed prices have continued to fall as a result of continuing reductions in the variety of other, non-module costs.

Reductions in inverter and racking equipment costs constitute roughly 20% of the drop in non-module costs for residential systems in recent years. Much of the remainder can be attributed to reductions in the aggregate set of “ soft ” costs, which have fallen partly as a result of increases in system size and module efficiency, though also because of a broader array of efforts within the industry and among policymakers to target soft costs.

Installed Price Declines Have Been Partially Offset by Falling Incentives.
Cash incentives (i.e.,rebates and performance-based incentives) provided through state and utility PV incentive programs have fallen substantially since their peak a decade ago, and have been largely phased-out in many key markets. Depending on the particular program, reductions in cash incentives over the long-term equate to roughly 60% to 120% of the corresponding drop in installed prices. This trend is partly a response to installed price declines and the emergence of other forms of incentives, however it has also been a deliberate strategy by program  administrators to drive cost reductions in the industry.
Read the whole document here>>https://emp.lbl.gov/sites/all/files/tracking_the_sun_ix_report.pdf